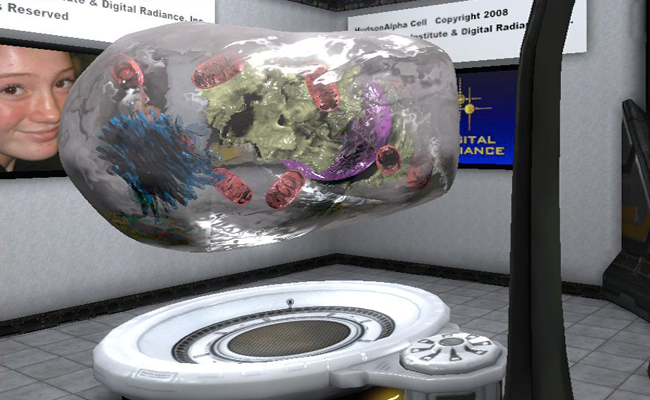 In the summer of 2008, I had the privilege of assisting with the asset development for Digital Radiance’s prototype of the HudsonAlpha Cell. The project’s goal was to create a 3D cell where users could closely examine a cell’s anatomy including the nucleus, DNA, and many other parts of the cell. The concept was inspired by the high-to-low zooming seen in the Google Earth web application. I contributed to the project by texturing various parts of the cell and creating the lab-like environment which housed the cell.

The cell was modeled in 3Ds Max, but the environment was both built and scripted in the Unreal 3 Engine. Since the prototype was presented to investors and young high school students, the controls were mapped to a Xbox 360 controller. Since most students were already familiar with modern video game controls, the look-and-feel was designed to convince investors and students that scientific learning can be done through video game technology.

Towards the end of the summer, the project was demoed at HudsonAlpha’s summer showcases. There, I gave presentations to interested audience members and high school students. Overall, the project was a huge success and HudsonAlpha continued to fund development for the cell. This lead to an iPhone app, Android app, and a web-based version of the cell the following year. You can view the project here on HudsonAlpha’s website.