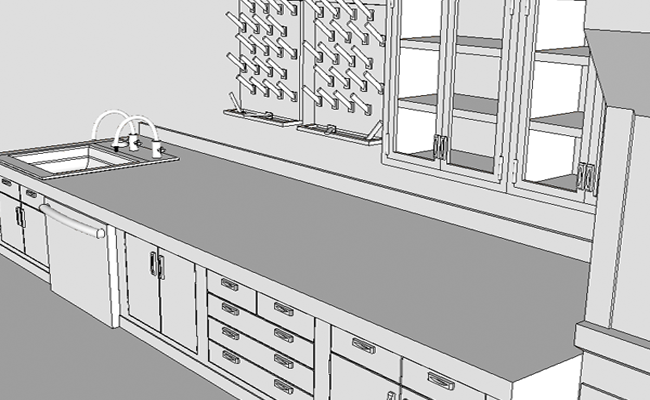 These science lab models were created in 2009 for the HudsonAlpha Institute for Biotechnology’s DNA Day. Each lab model was created using Google SketchUp 7. At the time, the team I worked for used Google SketchUp 7 because it was the most simple modeling program that could easily pipeline into the Unity3D game engine. The final textured lab models were pieced together into a fully textured virtual science lab which served as the backdrop for a 3D science experiment about DNA.

Besides some extremely brief work with 3Ds Max, this was my first true experience with 3D modeling. For each model, I referenced source images taken from one of the science labs in the HudsonAlpha building. Towards the end of the project, I also attempted to add basic lighting into the scene by using Google SketchUp’s LightUp extension. While the extension worked well within Google Sketchup, it did not provide any native support for editing or baking light maps into textures. So, instead of staying completely with SketchUp, the model was exported out of SketchUp and into 3Ds Max where another designer cleaned the models, baked shadows into the scene, and exported everything into Unity3D. From start to finish, the lab models took about two weeks to complete.

At completion, the lab models helped to teach students the concepts of recombinant DNA. The major benefit of the virtual lab was to provide students the opportunity to perform experiments that normally could not be done because of monetary or safety reasons. Labs like this, were part of a long series of sales pitches for teaching biotechnology through video game applications. The project lab was demoed by nearly one hundred high school students from the Huntsville metro area in the spring of 2009.