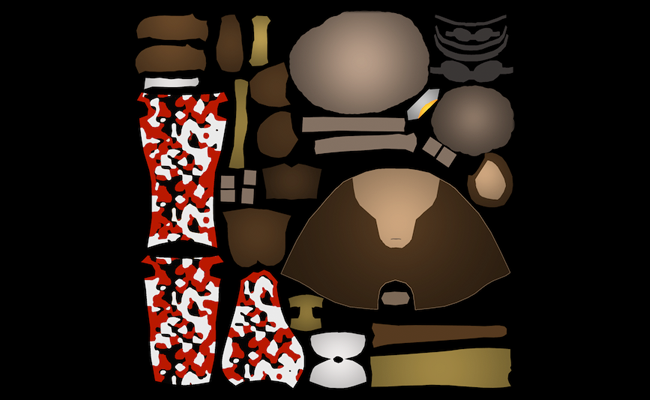 The Prime8 Monkey Model was my first attempt at a fully textured and rigged character model. The design was inspired by a commando monkey sketch I found online similar to the sketch seen here. The monkey has a persona comparable to a hardened war veteran from the World War 2 era.

In all, the model took nearly a week to complete and included an animation rig for basic walking and running; however, the model’s skinny legs and other disproportional features made the animations clunky and nearly impossible to use in Monkey Arena prototype.

The entire model was created in Blender. No sculpting was used during the modeling process, and the UV mapping was a combination of Blender’s auto-generated maps and some hand tweaks. I used a simple camouflage pattern on the vest and basic colors everywhere else. All texture maps were created in Adobe Photoshop CS4. The intent was to create a monkey model that was cartoon-shaded or just used simple colors. Other inspirations for the model came from the Playstation’s classic Ape Escape, all the Donkey Kong games, and the Soldier from Team Fortress 2. The model was never used in a game, but I still have plans to reuse its likeness in a future project.