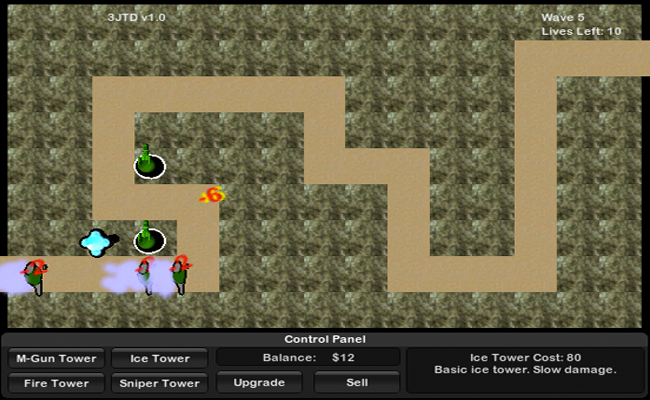 After a long series of game prototypes, my twin brother James, our colleague John Crabtree, and myself were ready to make a game from start to finish. 3JTD was created in one week in Unity3D during the 2009 Unite Conference in San Francisco. Between speakers, we worked side-by-side to complete the game.

3JTD is as simple as it comes, a standard tower defense game with waves of quirky little enemies. We opted for an extremely simple game and design, and we were able to make the game quickly while still including some vanity features like a user menu and end screen.

The game consists of twenty waves, multiple enemies types, and four towers with upgrades. Everything in the game was created within Unity3D (we used no external modeling or texturing programs). The towers have their own abilities which include a speed slowing spell and poison health drain.

Several weeks after the Unity Conference, I reopened the project to add a high scores list. I used some light database functionality built into Unity to retrieve and post high scores through the web. Although the game was featured online for a small amount of time, we eventually removed the hosting because the fire tower had a nasty habit of not rendering to the screen. Otherwise, 3JTD was a huge success, and a breakthrough for me after only making small prototypes.