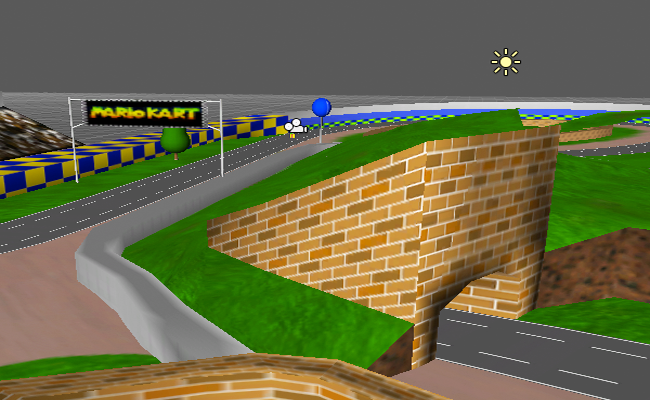 For Prime8 Kart Racing, I wanted to recreate one of my favorite experiences from Mario Kart 64. The result was a recreation of Luigi Raceway.

To recreate Luigi Raceway, I first listed all of the pieces I could find in the level of a piece of paper. Then, I created a chart of rough measurements to ensure the correct proportions of each object. Since the level was originally created for the N64, none of the objects were too complex. Plus, the level was eventually imported into Unity3D, so I was able to splurge and use extra polygons for trees and terrain; however, I tried to keep the majority of the model as close to the original as possible.

Each object was constructed in Blender in one master file. But, for the import process into Unity3D, certain objects like the billboard and tall Luigi tower were exported separately so that I could reuse the assets in later levels.

All of the textures were pieced together in Adobe Photoshop CS4 from samples I found online. The final model provided a legitimate test level for the physics in Prime8 Kart Racing. Also, the average laps times from this version and the real Luigi Raceway were surprisingly close.