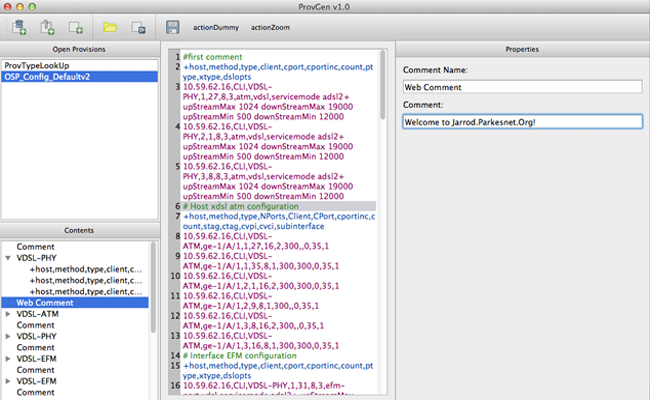 Provision Generator, or “ProvGen”, is a desktop application I developed for a group of system engineers at ADTRAN, Inc. to aid in creating robust configuration files. Prior to ProvGen, engineers of SDVT team at ADTRAN had to sift through lengthy comma-separated files in order to configure large systems for testing. For any new members of the SDVT team, learning the syntax of the CSV files to configure systems could take a couple weeks. But with ProvGen, I sought to create a GUI-driven application that took away the learning curve and a need for verbose text files. Instead, engineers would be given a user-friendly and intuitive way to configure settings for large test systems. I developed ProvGen during my first co-op semester with ADTRAN, and the product is now being developed and used under a different name.

ProvGen was created using the Qt Design Suite and runs on all major operating systems. When you open the application, users are given a large canvas to view their current provisioning files. Similar to other WYSIWYG editors, users could swap between a graphical and source version of files for high-level or granular control. I demoed ProvGen during my final presentation at ADTRAN in the spring of 2014 to members of the SDVT Team in ADTRAN’s Carrier Networks Division.